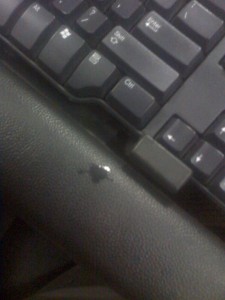 This happened some day last week. I was drinking water sitting in my cubicle at my system…As usual, I spilled some water. A drop fell on my keyboard’s hand-rest. And I was surprised to find what I saw…Immediately I captured it…Can you guys also see it? 😉

This word scares the shit outta me…Getting tagged by someone gives the feeling of being offered a complimentary noose just before one is hanged down the gallows!! But when I got this one from Sanket, I was quite suprised to see a simple one being offered to be taken to care of!!
Yesssss….I have been Taaaaagged!!!!!! 😀

Here are the 5 simple rules of the tag:
1. Pick up the nearest book.
2. Open to page 123.
3. Find the fifth sentence.
4. Post the next three sentences.
5. Tag five people, and acknowledge the person who tagged you.

And here is what I can offer (no no, I didn’t find the KS…someone flicked it with permission! ;)) you guys:

***He and Baba kissed on the cheek and he shook my hand with both of his. “Best of luck with the writing,” he said, looking me in the eye. His pale blue eyes revealed nothing of the thoughts behind them.***

The above excerpt is from Khaled Hosseini‘s “The Kite Runner“…Being a slow reader, I had not yet reached the page numbered 123 of this book. This tag made me break a rule of peeping into the future!! 😉
This book was presented to me by a good friend who became so engrossed into the lives of Amir and Hassan (the main characters in this book) that she is now a die-hard fan of Khaled Hosseini!! I have unconditionally loved it till the point where my book-mark stands now and I hope to reach its climax very soon!! 😀

Why is it that?

Phew…does all this or even more happen to all you guys or is it that…I get to experience things which I feel is common, but is actually not…if so, Why? 😦

Of a Monday and Dasavatharam Movie…!! :)

Mondays are a little dull when it comes to work and working. Till late our evening here in India, its Sunday at our client place or rather very early Monday morning. So naturally we are forced to work less and hence nod our heads (anyways…vertically or horizontally) when someone asks “Monday blues eh?”!!! 😀
Yesterday was a Monday and as usual there was nothing to do except for wishing 3 of my friends on their birthday through the different technological means. Wished one by text messaging, another one by mailing and third one by calling from office (UK bozo!! :D)!! I am comfortable to wish people on their Birthday without talking to them (not that I don’t call and talk nor that I am a miser when it comes to calling using my cell phone…not any of these cases) cos each time I call, its the same conversation that takes place and I can’t be creatively active when on call! 😛

The conversation goes somewhat like this:
Me: Hello Birthday Baby (BB)…
BB: Hey Hello buddy…
Me: Many Many Happy Returns of the day…and wish you a long life.
BB: Thanks a lot yaar…
Me: What plans for today?
BB: Nothing much ya…in the evening I am going out with…blah blah…(goes for about 5-6 minutes before I interrupt with…)
Me: Ok…cool…So when and where are you treating me?
BB: Err…we’ll decide sometime…ok?
Me: Well…ok…Chal yaar…have a great yr ahead…Happy Birthday once again! 😀
BB: Thanks a lot for calling! 🙂

Not one of these have come back to decide about the treat so far, until I have given them Deepika/Katrina’s or Hrithik/Shahid’s kasam!! 😛

Took about 3 breaks since having landed into office as early as 10am…and finished the small amount of job that I was assigned by 11am…and then I heard my ex-teammate Arun stand up and call me to his cubicle.
“Are you game for Dasavatharam movie this evening?” he asked.
“Who else is coming?” I questioned amused.
“Two more guys from my team and two from your team” he explained the count.
“My teammates? Wow…yes then I am in…book one for me…what time?” I had already packed my bags in my mind! 😛
“4 15pm show…we’ll start by 3 30pm” Arun confirmed as he clicked “Confirm Pay” on the multiplex website!! 😀
“Great…catch ya later” I said and dashed to my cubicle to let a few of my friends know that I am going for the movie, they had unsuccessfully dreamt of going in the first week of its release!! Their expressions were worth a look…and their swears, music to the ears!! 😉

Till about 12 30pm I was chatting with a handsful of friends on the office communicator….Had lunch at 12 45pm…messaged a few more friends including my roommates about my afternoon plans…got “interesting” replies from them…hehe…and by 1 30pm I was back at my cubicle ready to do ‘nothing’!! 😀
Then began the series of chain mails, all at the expense of the birthday gal and I didn’t know when and how quick the clock touched 3 15pm. I rushed for a quick Coffee break with DJ and Secy…and then exactly at 3 30pm with a colleague in the pillion seat, sped towards the multiplex to be there well before time.
We put the vehicles in the stands (paid ones :(), collected our tickets (paid ones, of-course!), and then parked ourselves in front of the screen 5 rows from the last row!! The seats were not at all comfortable, and not even worth half the ticket price!! The show began exactly at 4 15pm as mentioned on the website and on the tickets….

The movie “Dasavatharam” was in the original Tamil language, a language which I do understand (I think I can…!! Hmmm…well…) but cannot talk (rather frame proper grammatical sentences!!). I am not reviewing the movie here, as I am not the right person to do this. Kamal Hasan has played ten characters in this movie. I didn’t perfectly understand the first 15-30 minutes of the movie cos the lingo was in ancient (couldn’t think of any other word) pure Tamil. My colleagues (Tamilians) sitting next to me, later confessed that they didn’t follow most of it themselves! 😉 All I did during that first half hour was see the beautiful Asin (Actress) cry her guts out (and finally die) and one of the Kamal’s die.!! Sheesh… The movie then shifted to the US with the protogonist Kamal as a Biotech scientist over there in some Govt. Organisation (I don’t remember, actually)!! The US President George Bush (also played by Kamal) was shown at his foolish best….the mannerisms in perfect Bush body lingo!! 😀 The story takes us through a variety of situations, with Kamal essaying various roles on the way…Apart from the 3 roles I have mentioned so far, he goes on to play…a Japanese martial art teacher, a good-at-heart politician, a 95 yr old Brahmin woman, a close to 7 feet tall Muslim youth, a Daler Mehendi kinda Punjabi pop star, a Telugu speaking police officer and one of a finally-proved-to-be-mortal Terminator!! 😀

To my relief, Asin comes back to play a long and lovely role while Mallika Sherawat (introduced through a beetchy song) acts as a translator to the Terminator Kamal!! Wonder how Kamal missed a smooch with Mallika, though he came ‘this’ close!! Phew!! 😀

As we sipped on the now-warm coke and munched on the popcorn and Lays chips (all this was inclusive in the ticket costs, and in fact were charged at double the cost price) we saw Kamal bring out each role with utmost ease!!

Hilarious scenes were curtious to Kamal’s character of the Telugu speaking policeman Balram Naidu who could speak 5 different languages, all in Telugu!! 😉 The 7 feet tall character was one of innocence and giving. The Japanese teacher was all for taking revenge cos his best student was killed by the Terminator character. The old Brahmin woman’s role was very well played, and she was nothing but a pain in the ass, but she was Asin’s grandmother too! 😛 The politician character was too good to be a politician.

The songs were good…I liked all songs except the pop song which the Daler-like Kamal sings and dances on the stage with his wife (actress Jayaprada) inspite of having cancer (which finally to the doctor’s relief is taken out by the Terminator’s bullet that hits his cancer affected area and gets out from the back side….all this happens in movies, so believe it!!)!! This stage song looked like it had been forced unnecessarily in the movie…just to create a situational meeting point for all the alive Kamal portrayed characters!! The most awaited song by me (I happened to hear that being played by my flatmates, several times every night since quite a few days…and had taken a liking to it!!) which begins smoothly with an English one-liner “Dance with me before you go” and shrills to “Ulaga Nayagane” came at the time when the credentials were being shown….such a disappointment…but it did serve it purpose of making the people sit and watch the credentials along with how Kamal’s make-up men/women worked on him creating those 10 faces!! 😀
Happy faces were seen all around as we came out of the theatre, but me and my pillion companion didn’t wait long as we headed back to office (he had to catch the 8pm bus and not at all to work!!) and I lost my spectacles on the way only to realize after reaching office…Dasavatharam finally ended to be a costly affair for me!! 😦

All said and done, the movie was wonderful…go for it!! 😀

← Older posts
All in the mind…
Create a free website or blog at WordPress.com.