Being out of the city, I missed the TEDxVIT event but I was keenly following up with what my friend Shammeer (and his gang) was upto through his FB updates!
Shammeer – one of the main guys in the music band “Paadhai” – was one of two speakers at TEDxVIT, who otherwise sport the Cognizant tag on working days! 😉 The other one was our beloved Sukumar! 😀
Two days back, Kavitha posted about TEDxVIT (link: HERE) covering the TED talks of Sukumar (CKO, Cognizant) and Kirubasankar (CEO of “Business Blogging“) and after reading that, I wanted to know the kind of experience that Shammeer went through. So I requested him the same. And what can I say – He responded faster than the very thought that I got to approach him! 😛

I have always been this last row guy in college who doesn’t care what happens on the stage. But then, things do change and you end up on stage from where you can see your own mind-sets in the last row. 😀 I was told to be there @ 8:30am. 8:30?!!!!!!!!! I asked. That would mean, I’ve to wake up @6am to say the least. Rude I thought. But this experience was awesome, the transition from “Careless-guy-to-atleast-act-responsible-guy”. I know I cannot be playful when I share a stage with personalities of such great experience.

Honestly, first talk of the day was boring like a geography class and that’s when Sukumar took the stage. One word. AWESOME.
That’s was the first time I listened to him and I was glad to be there. His understanding, clarity of thoughts, respecting OTHER’s time – was something I wanted to learn. I hope, I will. My talk was on ”The common mediocre guy and his dreams”. 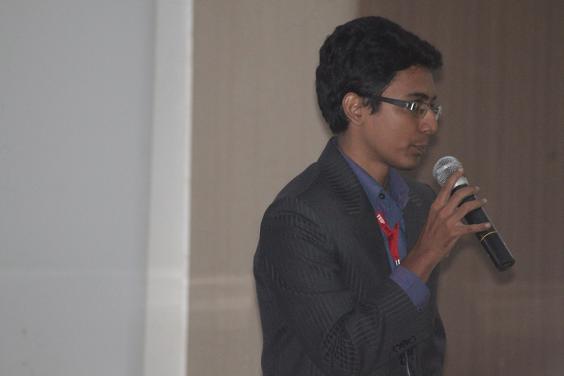 “IDEAs are IDEAs. There are NO big IDEAs, NO small IDEAs. NO average IDEAs. IDEAs you got, IDEAs I got…IDEAs of the last row and first row got the same respect until it comes to execution. Few live with their IDEAs. Few let their IDEAs die…and there are few others whose IDEAs are stuck under the wheels of our system…whose IDEAs cannot take a wing and fly under the heat of our system. Most of these IDEAs would be the IDEAs of the MEDIOCRE…
Paadhai or me, is not a great talent…IDEA of a musical novel by itself is out of our inability. The inability and inadequacy to make a movie got us to what we can.
We can write…first time you find an IDEA…you jump…it’s like you see your girl for the first time…the happiest moment of your life…what could not be a happy time is the time you fight to marry her. You’ve to fight against the system to win her.
That happened to us…to Ranam sugam, the musical novel. Audio companies didn’t want the book…Publishing houses didn’t want the music…this is where we were stuck…It was sad that not many in our system thought of going for a merger…probably it was because of our don’t-give-up attitude and the great time we had all along, made this all happen.
So what if a common mediocre guy comes with a great idea without a never-give-up attitude? Do we always expect him to try out ideas only after he learns to develop the never-give-up-push-to-limits attitude? And what if he doesn’t? Are we okay in missing out the idea…are we gonna let the idea die in him…oh, that would hurt him!
Okay, on the flip side we cannot expect the system to be too kind for this common mediocre guy every time he comes up with an idea. He definitely needs more than that, for sure…but what we could probably do is create a platform…build  a system which doesn’t give things free, but create things for a taking…And if he wants that really badly he has to come up and take it…we just have to make things ACCESSIBLE…that is all a good-healthy system can do!
Well okay, preaching has to start from self…Paadhai would pledge to do that. So next time when a common mediocre guy comes with an idea that has something to do with a novel and music, we wanna be easily reachable to tell them what we did and help him out with whatever we can…for that execution…”

We also performed Ranam Sugam (unplugged) which got the “once more” cry from the audience. We got a standing ovation in the end which felt really good. But I thought, I could have done better. When I came home, one of my friends phoned me up and asked “How was the show?”. The first thing I said, “That girl in red was awesome, machan” Few people don’t change. 😉

Posted by Sree on January 27, 2011 in Friends, Stories, Thoughts